Note that this tutorial uses AWS resources that are outside the AWS free tier, so be careful!

With K3s you can deploy a production environment only in a few minutes.

The main features of K3s are:

For this tutorial you need:

The first step is to colne this repository.

the strucutre is the following:

The “magic” parts of the repo are the .sh files under the files directory.

This files will automatically install and configure our K3s cluster, let’s take a look at k3s-install-server.sh

The first part of the scritp install the unzip binary and upgrade our system, then the script install the aws cli tool.

The script then set some variables:

Now the magic part: the script check if this instance is the very first k3s-server instance launced. In this case the script trigger the “cluster init” since at the moment ther is no cluster.

After the installation the script wait until the kubectl command is available and get a response form the kube-api server.

The last step is to install the node termination handler since we are running on EC2 spot instances. For more detail see “Cluster resource deployed” above.

The k3s-install-agent.sh follow the same logic, but there is no logic for the “cluster init” since the instances are launched as agent.

Both k3s-install-server.sh k3s-install-agent.sh are rendered when the launch template is created. This files are then used as “user data” on all the future EC2 instances tha twill be launched. For more details see here.

The oter main part of the repo is the vars.tf file, details are explained above in “Environment setup”.

All the other files uses the Terraform AWS api, for more details see the documentaton.

If this is the very first time you use Terraform you need to create a new access key to use with Terraform. Since Terraform initial setup is out of the scope of this tutorial, you can follow the “Prerequisites” step on this link.

Once you have your access key create in the root of the newly downloaded repository a file named terraform.tfvars. The filw will look like:

on the vars.tf file change the following vars:

you can also change this optionals variables:

You have to create manually an AWS IAM role named “AWSEC2ReadOnlyAccess”. You can use a custom name for this role, the name then have to be set in vars.tf in instance_profile_name variable.

The role is made by:

In this tutorial the High Availability of the K3s cluster is provided using the Embedded DB. More details here

The final infrastructure will be made by:

The other resources created by terraform are:

Notes about the auoscaling group:

Here it is a diagram of our infrastructure: 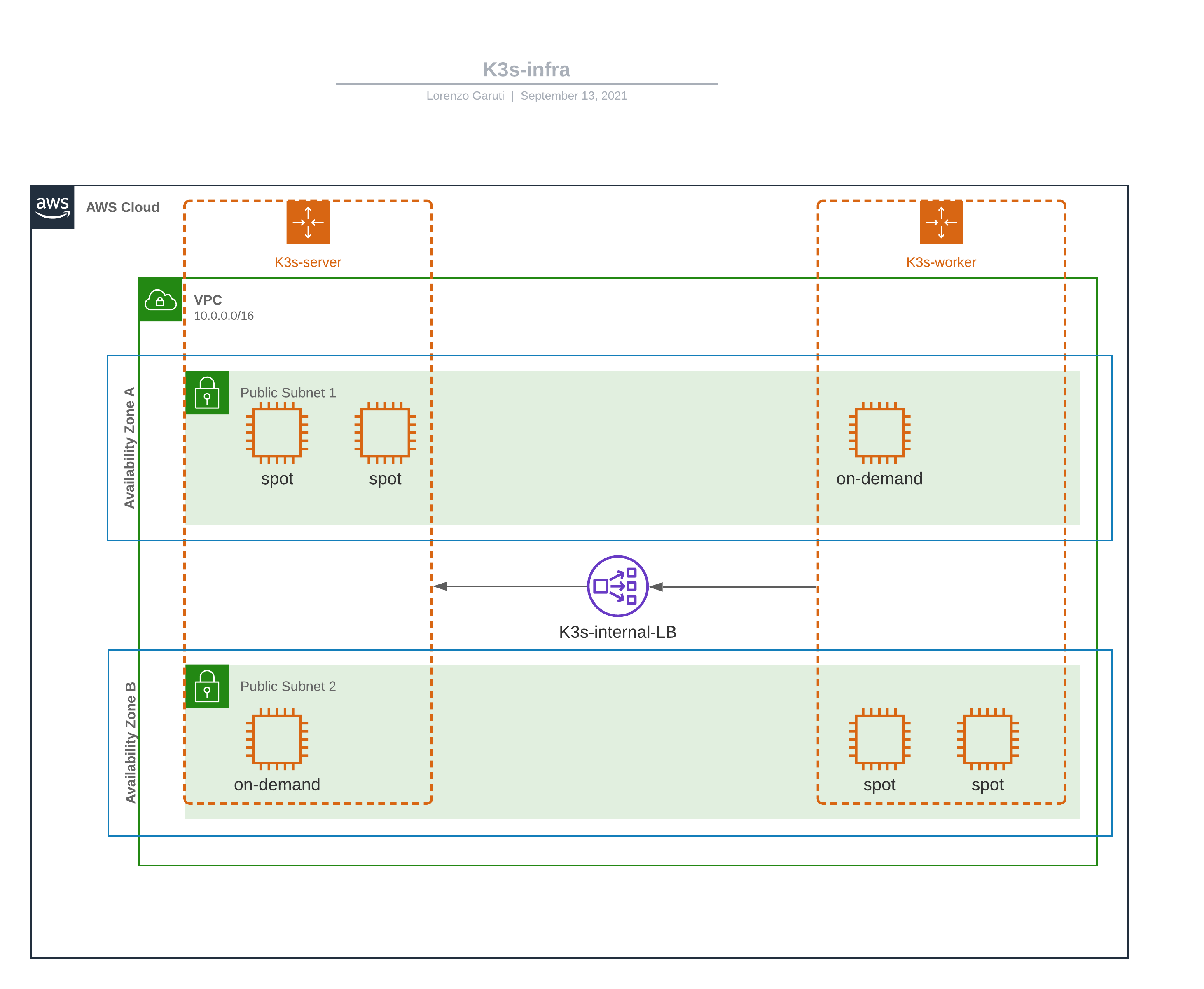 Note: in this diagram there are only two AZ, in our setup we will deploy our infrastructure in three AZ. The number of the AZ depends in which Zone you are deploying the stack.

The types of instances used on this tutorial are:

The other EC2 instance types are defined/overrided in asg.tf, and are:

With these settings there are more probability that our spot instance request will be fullified. Also the allocation strategy is a very important settings to check. In this configurations is defined as “capacity-optimized” on asg.tf

You can change the kind of instance used editing asg.tf and launchtemplate.tf

Very important note since we are deploying a Kubernetes cluster, is very important that all the instances have the same amount of memory (RAM) and the same number of CPU!

First we need to download the Terraform provider files

We are now ready to deploy our infrastructure. First we ask terraform to plan the execution with:

if everything is ok the output should be something like:

now we can deploy our resources with:

After about five minutes infrastructure will be ready. You can now ssh into one master (you can find the ips in AWS console or use the aws command line to find the ips).

If you have the aws cli installed you can find the ips of the master nodes with:

On one master node the you can check the status of the cluster with:

Note after the instances are provisioned it may take up to five minutes to get kubectl command available.

Tip to check the status of the K3s installation check the /var/log/cloud-init-output.log file under /var/log directory

In this setup will be automatically installed on each node of the cluster the Node termination Handler. You can find more details here If for any reason you don’t need the node termination handler you can edit the k3s-install-server.sh an comment the lines from 40 to 44

we need to edit also the ssl-certs volume. The updated volume will be:

Note the certificate path may change from distro to distro so adjust the value based on your needs.

Now we can deploy the cluster autscaler with:

Remember to clean all the previously created resources when you have finished! We don’t want surprises from AWS billing team: